W.E.B. DuBois coined the term double consciousness to describe the feeling of being Black in America and it is just as relevant today to note the experience of departing in order to relax in nature while being keenly aware of how nature’s seclusion has been used to disappear people like us:

Black, queer, women, and any intersections of them.

During the first wave of COVID-19 last April, my wife and I attempted to detach from the pandemic and protests by escaping to a rental cottage on the Ouachita River in central Arkansas. We rented another on Lake Catherine in Hot Springs as the second surge of cases exploded across the country in mid-November.

The two weekends were reminiscent of our move from Chicago to Arkansas two and a half years ago — an escape of its own from the prevalence of gun violence that had steadily encroached on our neighborhood. The move from a majority Black populated city to a predominantly white town illustrated a culture shock for me. I felt thrust into a place where the shouting, racist, MAGA-hat-wearing people were no longer separated from me by television screen and YouTube clips, but were my new neighbors, or more accurately, we were theirs.

As two Black queer women, we are hyperaware of our presence in predominantly white spaces. One of the myths of the Great Outdoors is that nature is the great equalizer. However, our time in the Natural State and specifically our weekend getaways illustrate the outdoors as another white space in which we must carefully navigate. From Trump-flag-waving boats on the Ouachita River to a potential superspreader birthday party on Lake Catherine, we’ve witnessed the intersectional nuances of threats to our safety in the Great Outdoors and its wildlife was exempt of bears, snakes and wolves.

Both of my parents relocated from the South to Chicago as part of the tail end of the Great Migration. My childhood rearing was a joint venture between Chicago and summers at my grandmother’s home in Memphis filled with daily fishing excursions to local watering holes. My mother allotted my brother and I two bathroom breaks during the eight-hour road journey when she’d fill up the gas tank at the only two stops that she felt remotely safe. And although we passed by state parks from the four states that we drove through, there were no stops for admiring the beauty on those highway exits. The roads and the woods aren’t safe for Black travelers. Not then and not now.

My mother recalls a story of driving in Chicago and finding herself and my then toddler brother in the midst of a KKK parade. Hoods and flags. She quickly reversed and sped away as my brother waved back at the white-robed mob.

Last year, all the people speeding by our Ouachita River rental flying Trump flags that rivaled the sizes of their pontoons and WaveRunners waved at us. Our return waves and smiles mirrored the performative cheer reserved for police stops and invasive questions from the white citizenry that have ended Black lives. Each moment of peace that we found while fishing from the dock, relaxing in the hot tub, and singing along with our music was punctuated by the roaring flagged boats charging through the river.

I always choose a rental with doorstep access to the water in order to safely seclude our isolation. I’ve gone to local fishing spots and although the majority of the experiences were pleasant with kind strangers offering tips and sharing bait, the two that I revisit were by far the most worrying.

On one occasion, a white man approached me and started a conversation as I fished Beaverfork Lake, an open area and highly visible park lake. It wasn’t unusual except that he appeared very distracted and rambling. I continued to fish, positioning myself closer to my truck bed where I could access fishing knives and scissors if necessary.

After a while, he returned to his truck. He revved the engine and spun around in a series of donuts in the open area allowing one of the largest Confederate flags I’d ever seen splay out from the rear of his truck. Then he peeled off leaving me to quickly pack my belongings lest he returned with the rest of the Confederacy.

After that, my wife insisted on accompanying me on my fishing trips. On one of these trips to Beaverfork, two white teenage boys parked disturbingly close to us while fishing and proceeded to haul out large melons and hurl them into the lake mere feet away from our fishing lines. Each fruit bomb elicited shrill giggle fits as it splashed into the water. We stood our ground until their departure and resolved to get our concealed carry training and permits, and a gun to protect us from the dangers and disregard of white people who go out of their way to show that we don’t belong in the Great Outdoors.

And yet we persist. I think of the rental we procured pre-pandemic in Mountain View last year. Nestled in the Ozarks, the city boasts a tradition of folk music and culture. The drive takes you through narrow mountainous lanes absent of barriers between the road and the perilous distance below. We arrived at the quaint cottage and immediately took inventory of our surroundings including the peaceful stream, thick woods and neighboring properties.

One of the myths of the Great Outdoors is that nature is the great equalizer. However, our time in the Natural State and specifically our weekend getaways illustrate the outdoors as another white space in which we must carefully navigate.

W.E.B. DuBois coined the term double consciousness to describe the feeling of being Black in America and it is just as relevant today to note the experience of departing in order to relax in nature while being keenly aware of how nature’s seclusion has been used to disappear people like us: Black, queer, women, and any intersections of them.

And yet, somehow we manage like Black folks and Black queer folks do. I think of Tim O’Brien’s collection, The Things They Carried, which details and connects a group of Vietnam war soldiers’ tangible and intangible burdens of grief. I feel that deeply.

In addition to packing necessary equipment and appropriate clothing, we research the racial demographics and race-related current events of locations; sundown towns still exist. We carry our right to exist in nature alongside whatever protective measures to which we can avail ourselves. We carry our trust in each other as much as our distrust in systems that executed and/or covered up the murders of Black women doing the very thing that we seek to do: exist in nature.

There must be a term for the act of remaining on guard while trying to relax. We toured Blanchard Springs Caverns during our Mountain View stay. Till then, I suppose I hadn’t realized the difference between a cave and a cavern, the living underground cathedrals constructed by nature. We were the only Black people on the tour and as we delved deeper into recesses of the earth, we shifted our unease to take in the formations of stalactites, stalagmites and columns. While other couples enlisted fellow tourists to capture their kissing photos in front of these mountainous mineral deposits, we contented ourselves with less-than-intimate selfies.

Well-meaning folk who ascribe to a “live and let live” creed will argue that we are hyper focused on our race and orientation. Yet these people are rarely targeted for these identifiers, and certainly not for any of several that may cause unwanted attention. In all of the experiences of harassment that I have had, witnessed, read or heard, no one has ever approached, asked for or instigated their own harassment. Catcallers shout at and follow women. Racists hurl epithets. Homophobes hunt down queer and trans folk. Although most of our encounters are not physically harmful, there’s the mental taxation of simply being questioned for existing in the same natural space.

For my wife and I, the remedy lies in the recent purchase of a 15-acre homestead as our own safe space in nature where we will eventually host small gatherings (post-pandemic) for people like us — Black queer women, the most vulnerable population. We welcome supporters to follow our journey at Conner Homestead on YouTube where we share our experiences as two Black queer women new to homesteading. Our hope is to share knowledge and be a positive representation of Black queer excellence in physical and virtual landscapes. 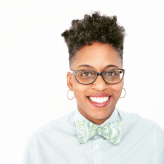 M Shelly Conner is an assistant professor of creative writing at the University of Central Arkansas. Her multi-genre writings examine culture through a dapperqueer womanist lens and include publications in Crisis Magazine, the A.V. Club, and the Grio. Her debut novel everyman is forthcoming (Blackstone Publishing, 2021). Shelly is repped by Beth Marshea at Ladderbird Agency.